The Swell in the Fantasy Market

Posted on March 30, 2019 by David J Cambridge Leave a comment

Greetings dear readers. So, here we are, at the end of March already.

Red Star Rising is up as a preview, and PDF/Word copies are available here. With that ground work done I’m moving into the final edits of the book and the start of drafting submission letters.

Along the way I’ve encountered a few, new dilemmas. Not least of these is the rather curious problem of associating myself with a particular subgenre (more on that next week). Having tried to read more blog posts from the wider realm of WordPress I realised that I’ve become out of touch with the recent releases.

THE SURGE IN FANTASY

A recent post I read trumpeted that there was a surge of fantasy (and sci-fi going on), a veritable blooming. Have you noticed? Yes, indeed, it’s popping up all over the place. I suppose that it’s a natural development as the variety of channels grows and entertainment looks for new ideas, while the success of Game of Thrones has certainly sparked some growth.

And a special shout out to Netflix for the awesome Altered Carbon and for embracing weird stuff like Love, Death and Robots (seriously check out these shorts, some of them are wonderful, and the ones you don’t like, well they’re only about 10 minutes long on average). I particularly like Good Hunting about the Chinese spirit hunter’s son and the shape shifter. Check it out for the transitional elements that go from the loss of possibilities to their rediscovery. Any more and I’d spoil it.

Anyhow, what’s your point here Dave? Ah, yes, the point. Well, as I was saying I’ve become a little out of touch with the vast groundswell in fantasy novels that are splattering the internet. Being rather tight on cash much of the time I have bought relatively few new titles, and of those some were already from established series such as the conclusion to Ian Esslemont’s trilogy about the origins of Kellanved and Dancer (and the empire they built that underpins Steven Erikson’s  Malazan Books of the Fallen).

Thankfully, as I’ve been pushing myself out into the wider arena with my own work I saw that I’d let the side slip. So I started paddling in the sea of titles, trying to broaden my access to news and reviews. I’d sign up to Angry Robot’s mailing list and found some interesting titles, and dusted off my partner’s old Kindle (as they only seem to do e-books).

With the first “data load” from their mailing system I was drawn straight to the cover of The Ingenious:

“Thousands of years ago, the city of Athanor was set adrift in time and space by alchemists, called the “Curious Men”. Ever since, it has accumulated cultures, citizens and species into a vast, unmappable metropolis.

Isten and her gang of half-starved political exiles live off petty crime and gangland warfare in Athanor’s seediest alleys. Though they dream of returning home to lead a glorious revolution, Isten’s downward spiral drags them into a mire of addiction and violence. Isten must find a way to save the exiles and herself if they are ever to build a better, fairer world for the people of their distant homeland.”

Spreading my nets wider I then came upon all the lists of recommendations that bloggers are fond of compiling. Amongst these were best sellers and sleeper titles that I hadn’t come across, and as I wended my way along I started making my own reading list.

First up were some of the successful titles such as Black Leopard Red World and The Priory of the Orange Tree which have received a bucket load of praise. The first is heavily inspired and themed around African history and mythology, while the second has garnered remarks a-la the feminist incarnation of Game of Thrones – perhaps a tad hyperbolic – but it is good to see a diversity of voices making their way into a genre that has typically been diverse in representing the ‘other’ and exploring the unlimited possibilities.

So, having found a number of books tha 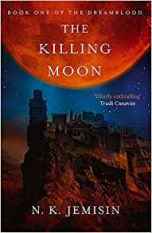 To quote the Bloodharbor Ripper (in a suitably menacing voice), “My list just got longer.”

Anyhow, no matter. “A writer reads” is an oft mentioned phrase and now I’ve got a starting point: I’ve grabbed a second-hand copy of The Killing Moon by N.K. Jemisin which draws on Egyptian myth and centres around the gathering of magic from the dreams of sleeping citizens. This magic is used to soothe the city-state….. and eliminate those deemed corrupt.

With the Summer on its way, I’ll certainly be burying my head in some fresh fantasy,  and maybe, just maybe, I’ll write a few reviews to let you know what I think.

What about you? What have you been reading? Got any recommendations from either the big press or the sphere of self publishing?

Let me know in the comments and I’ll catch you next week.