What I Learned From Playing Open Mic

Posted on December 15, 2018 by David J Cambridge One comment

So earlier in the year I made a vow to play an open mic. For those who weren’t on the train back then, I severed a tendon in my finger and it contributed to a mental malaise that, at the time, became serious enough that I might have quit playing guitar altogether.

But I bounced back, determined to face the one fear that I was overtly conscious of. It would take me a couple of months to get into a position where I was ready, but as a long time guitar player I knew that the only way to move forward with my playing was to stop depending on practice as an excuse and actually play in front of other people.

Then Summer Solstice rolled around and I did get drunk, and I did play “I’m The Urban Spaceman” at the camp fire. What the camp provided was a safe space for me to play, somewhere relaxed and informal with a variety of people who were pretty chilled. It is a zone without judgement, and at its roots my artistic sensibilities were afraid of not being good enough, of being judged as mediocre. (This is something that I’ve talked about in previous posts).

Into this space I took a step forward. One of the resident musicians, Lucien, who is a mainstay of the camp fire sing-a-long and a veteran player, gave me some advice:

And so it was that I booked a slot at The Yard, a great little social space located in a garage, and it was destined to become the venue for my first performance.

I would need to fill a 20 minute slot.

Let me start by saying 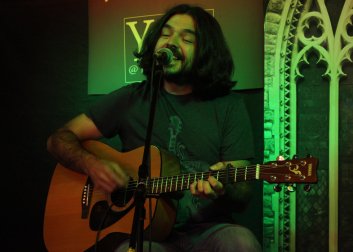 that I would count myself as at least an intermediary player. I’ve put in a bit of work and understand more than a little music theory. To those who aren’t musicians my playing can sound pretty damned good.

Well, I had a fairly good notion that my nerves would be the biggest obstacle, and so I made sure to keep it relatively simple. It was open chords – loving referred to by some as zombie chords, employed up and down the land by buskers and open mic players – and it was basic techniques.

Yet the first thing I learned was that it doesn’t matter how good you are at playing in private because once you’re on that stage it’s a totally different situation, a new frontier and as technical competence went out the window I understood: I am totally new at this, ground zero, just a noob.

You are, in effect, learning a new skill. “Playing live”.

Thankfully I had the basic, practiced motor skills to back me up and, despite the nerves, I made it with just one or two minor mistakes. Five songs, twenty minutes, the most audacious of which was number 3. I played an arrangement of Kath Bloom’s “Come Here” and my partner came up to sing it. I wasn’t sure if she’d get up, but she did and that took some real heart. We nailed it!

Then came the compliments and my confidence felt boosted even as the knot of nerves in my stomach finally untwisted – I got the cramps only after I cracked a beer and started to enjoy the rest of the show. 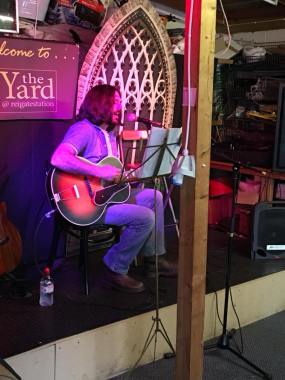 My second open mic was, by contrast, a total catastrophe. Well….. okay, it wasn’t. But why so serious?

This is how it happened.

I was having a hard time. I was getting seriously fouled up by my own attitude, by the pushing and pushing to add songs, to make it better, to achieve despite the fact that I was only just off the starting block.

As I wrote in my blog post previously, “your enemy is how you think”. I became mired in a negative feeling and I couldn’t get one song in particular to work. I couldn’t perform it and I was faced with cutting the performance down and doing some of the same numbers as the month before. I was annoyed that I’d be repeating the same songs. As the deadline came closer I considered just cancelling.

But I saw it through and when the day came, it went badly. I fluffed every song at some point, to great or lesser degrees. I recovered them, true, and kept going, but the whole vibe was resonant with my own negativity.

Some people think that talk about “energy” is guff, hokum, tin foil hat territory, but to me my failure was the manifestation of the energetic process leading to the performance.

And although my performance wasn’t actually that bad, I perceived it as a failure. I brooded on this and felt like giving up, just because it wasn’t good enough. The streak of perfectionism was sabotaging me. It became a terrible spiral. I didn’t play anything for a week because I was so irate about it.

I had simply built up an unrealistic expectation after the first performance. I had in effect failed to remember rule 3: take it in small steps. I was being a noob again. Get a grip! Realise that it takes people years of playing week in and week out to develop a life on the stage.

With that understanding I knew I’d have to go back and face the stage again. It was either that or quit for real.

It started in uncertainty

. Would I would play open-mic in November? It clashed with a friend’s birthday and we might have been feasting in celebration. But there were no plans, so my friend and his partner were going to come to the performance.

So I got my set list together. One week to go. I practiced the songs, thought I had a handle on it and even planned on playing one of my own songs that I had recently penned. I was pretty chilled about it this time.

Then I got sick. Stomach cramps became a serious puking session. I stopped eating for two days. Could I get it together to play? Thankfully I was over the worst of it, and although Saturday morning I got a little nauseous, I was pretty confident that I had the songs down in my head.

It rolled around and one of the regular “pros” was on hand to sort the PA. I cracked on, made only a few minor errors. Then for the finale I played a song I’d written called “King of Autumn” which drew heavily on a strange dream I had.

And yeah, I messed it up initially because of the nerves, but once I started it over I nailed it pretty good.

In that moment I moved from playing the songs of others to playing my own material. I had proved to myself that I could do it, and that by being relaxed and just dealing with it, I managed to give a positive performance.

I was back, and moving forward again.

In that final performance I felt that I was finding a place in an unspoken hierarchy, in a system, and perhaps it was only in my mind but at some level we all appraise each other, make judgements on skill. I’d experienced some of it at its worst from other musicians (and they were friends!), and this was one of the things made me uneasy about playing to others.

Well, I was not as bad as the worse, not as good as the best, but somewhere in between. It was a starting point. I had earned my spot on the ladder, and now it was time for the hard work of climbing through incremental improvements.

But isn’t it just for fun? Yes and no. I want to be better, and I want to get good enough that I can play one of the local summer festivals. I have artistic aspirations that come from being creative and now slowly, over the days and weeks that have followed, something is changing in my attitude.

I feel like I can call myself a musician. I am more confident. I’m writing more songs. It’s all part of a process. Part of becoming the artist I wanted to be when I picked up guitar in the first place. As to what inspired that, well, that’s a story for another day.

But it couldn’t have happened if I hadn’t faced the fear of getting up there and doing it. This is what counts in our endeavours; not the planning and the excuses because you need to practice a bit more, not the procrastination because you just need to make sure its right. It’s the doing, the pushing yourself out there and accepting the consequences, of going through the ordeal and learning from the discomfort.

I leave you now with the words of my partner, who herself played November after only a short amount of practice with her new autoharp:

“Open mic is like cooking a big meal for people. First you get nervous, then you go through the stress of whether or not it’ll taste good or you’ll give them food poisoning, then you all sit down and it happens. Afterward you get the compliments.”

And so you just want to do it all again.

Well, that’s all for today folks. Stay tuned for  a dark festive offering that’ll be winging its way to you next week.

[P.S. I nearly forgot. I did say I would play People Are Strange at open mic, and although I’m learning it, it’s taken a back seat for this year. It’s on the to do list for 2019.]